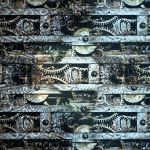 I wrote Song for the Bluebird after I discovered an old notebook which contained angst-filled poetry that my now wife, Lisa, had written as a teenager. The words really jumped out at me as something that would work well in a musical context. This is one of many poems that I used when writing my two band albums, I Can See You and Strange Machine.

Bluebird was recorded during the I Can See You sessions but not included on that album because it didn’t blend well with the other tracks. So it was included on Strange Machine especially because of the constant motoric piano part.

The vocal part in the verses also use an interesting structure in which each word’s phrase is disjointed, often starting a new phrase with the last words of a previous line of poetry and connecting with the next line as if it was meant to be one phrase – further experimenting with loops.

Please sir, don’t squeeze him so there,
Take me instead
I can take it for him
’cause we are real friends